That's him on the left in this photo. I just thought the photo was funny in a "find the college athlete" sense. No disrespect to the kid next to him in the black shirt and black shorts - he might be 14 years old for all I know - but Jordan Anderson has a slight edge on you in the "ready for college football" category.

And yes, I know that's Malachi Hood in the Illini shirt. I'll be writing his LLUOI soon. I'm just pointing out that Jordan Anderson is a big dude.

I'm also likely going to do the same thing with Anderson that I did with Josh McCray: "No way he's a running back, right?". He'll likely end up at tailback as I learn exactly what this staff wants at tailback but when I watch this film, I see an eventual EDGE guy. It's so hard for me to not see a kid who is already 220 lbs. as a junior in high school ending up as a 6'-3", 255 lb. pass rusher.

Now, I've already backtracked on saying that re: McCray. I wrote his entire LLUOI post saying "if he's already 220 lbs, he's more likely a defensive tackle than a running back". Then Bret Bielema talked about John Clay a bunch during pressers this spring (Wisconsin's 255 lb running back during the Bielema era in Madison), and I started to change my tune, realizing that we're not going to have Jakari Norwoods at tailback under Bielema - we're going to have John Clays.

So that's my bias here. I see 6'-3" and I see former Illini TE Jon Davis. Now, Jon Davis was used as an H-back who would shift into the backfield and he did get 41 carries in his four years in Champaign, more than half of those carries in 2012 when Chris Beatty and Billy Gonzalez decided to use him as their tailback for a few games. But in nearly every other game, he was a tight end.

Let's look at some of his film. In every one of these my main reaction is "look at how big he is!", so yeah, I'm probably not going to shut up about it for the rest of this post.

Here he is bullying a poor cornerback trying to tackle him:

And here he is looking like a defensive end being handed the ball in the backfield and then running past/shoving away the JV defense:

Now, this one I really love. Huge fan of all "wait, he's still on his feet?" highlights:

So I see that, and I'm excited, and then my immediate thought is that we were the only Power Five program to offer him. Maybe we can blame that on Covid? Let's go through his Twitter timeline.

In the fall of 2019 (so during his sophomore season) he visits Iowa State and Notre Dame for game day visits. He also visits Wisconsin in early March of 2020 (10 days before Covid), so he was at least on the radar of other midwest programs.

Then, Covid. No camps, no visits, no coaches visiting his high school - nothing. But the offers do begin to roll in. In order, Toledo, Bowling Green, Ball State, Miami (OH), Eastern Michigan, and Central Michigan. So half the MAC. But no P5 offers yet.

He doesn't have a fall season (the State of Illinois moved football to the spring), so nothing really happens after those offers (at least not on his Twitter timeline). His six-game high school season runs from March 19th to April 23rd, and after the fourth game, on April 9th, he gets an offer from Illinois. His season ends on April 23rd and he verbals to Illinois on April 29th.

So yes, I can see how this was a "grab him before others notice" kind of thing. He didn't publish his junior film on Hudl until April 25th and on April 29th he was an Illinois commit. Still, we need to acknowledge that he did visit Wisconsin, Iowa State, and Notre Dame as a sophomore, so they were tracking him just like Illinois was tracking him, and they did not offer. Nor did anyone else.

Ratings-wise, ESPN still has not rated him. It's pretty sad how ESPN has approached this class, to be honest. They've given a star rating to 9 of the 10 recruits (which doesn't really mean much - 90% of recruits get three stars now) but they've only graded three of the 10 recruits. Here's what the page looks like as of today: 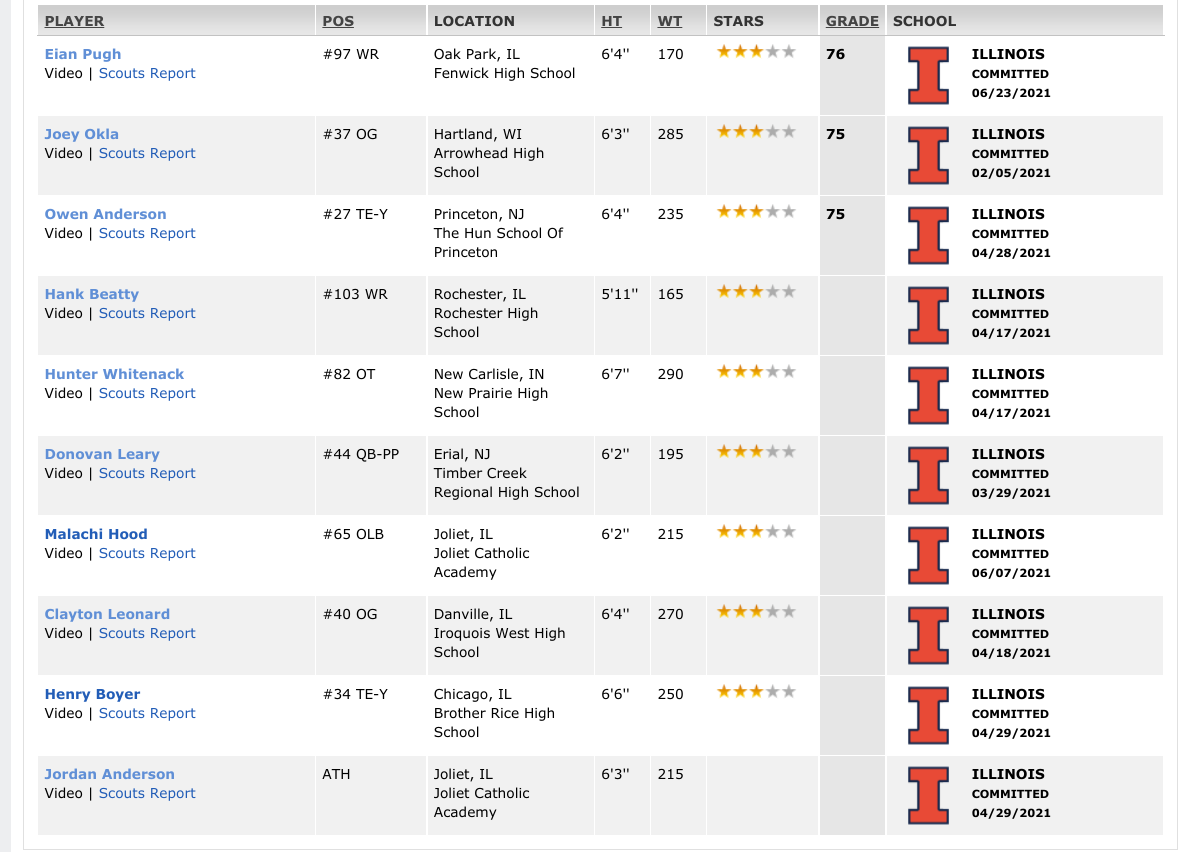 The other thing to consider before getting to Tom Cruises: his position. Both ESPN and Rivals list him as an ATH which is recruiting for "won't play his high school position once in college." 247 lists him as a running back. The coaches can't talk about him until he signs in December, so we won't really know their plan for him until then. My guess is OLB, but that's just my Tall Running Back Bias. I'll probably never conquer my TRBB.

6'-3, 220 probably translates to 6'-3", 255 by his senior year of college. Maybe 6'-4" (he's just a HS junior). That's probably right around the height and weight they want for these OLB positions in this defense. So while he could be a tight end like Jon Davis, I'm thinking eventually OLB.

Which would mean he has a position to learn in college. Which always keeps the Tom Cruises a little lower. As does "besides Illinois, only had MAC offers". So I don't think I can go very high on Cruises. Blame my TRBB.

Hmmmm I think that’s a bit soft IMO. Consider throwing out the Mac bias because if he can’t get evaluated due to Covid, Mac teams know he’s an easy take for them but Notre Dame would probably want more film and time. Because of this staff he’s evaluated early and they push the pedal and boom he’s ours. It’s not his fault ND or others were slow..just speculating. Also the cruise downgrade because of your bias against the position he’s at. Again he may be a giant running back compared to what we are used to but not BB. Also he is standing at the end of the row and is forward, the hold your Bass out from your chest a few more inches effect. Yes he’s big, but maybe not too big to be a John Clay. His feet? Speed? Size? YAC? Program? I just don’t see that weak of a prospect. Tight end, LB, RB, HBack...don’t care, gifted kid from great program, love the pick up.

Agree with you IBF, particularly given the early ND interest. Fingers crossed that he’s still ours come December.

I have a feeling that the next 2 will also be low since it took months to put out a LLUOI.

What a change from the previous regime! Lovie would have lost this kid for sure by waiting around. With the Covid situation, BB's approach seems to be the best possible situation. I wasn't sure about BB when he was hired, but at this point I don't know how he could be doing better.

Robert, It would be very helpful to have a refresher on what the Tom cruises mean. Does 1 cruise mean likely flop or does it mean you aren't excited? What does 3 cruises mean? It feels like it is a combination of offers and site ratings. That determines the base. Then you look at film and adjust from there. But the end result- what does the rating represent?

They're basically just a probability distribution of projected impact on the team's competitiveness in the B1G. So a one Cruise has low probability of becoming the key difference maker, whereas a five Cruiser is somebody you'll want on the field all the time because they can break out at any moment. Make sense?

Every team needs a back that no one wants to tackle. He could be one of those.

Say what you will about the current coaching staff at Notre Dame, their talent evaluation has been pretty good for the most part. Thus, if they're in on a player, then I think that's a player Illinois should want.