I like researching things. One of my favorite research topics when Illinois lands a kid from a small school: school district boundaries. Especially rural school districts. Because of my time working as a Scoretaker at the News Gazette back in college, I know of nearly every school district in east central Illinois. I'd be sitting there on a Friday night taking down the box score for Atwood-Hammond vs. Georgetown-Ridge Farm (we're talking old school ECI high school football). So I know of Iroquois West HS. But I don't know what towns are included in the district. Want to know? Here's the map: 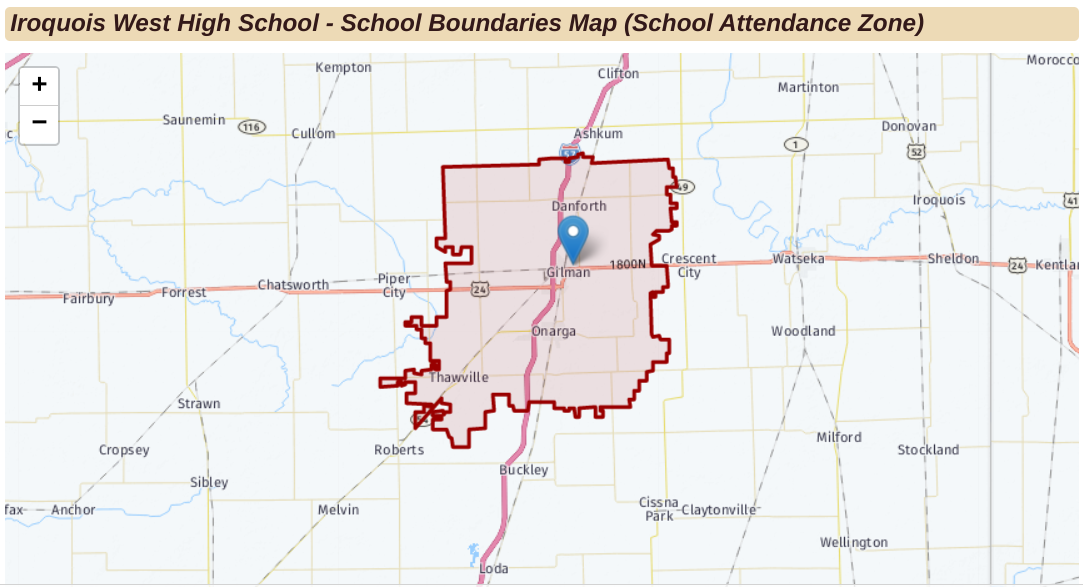 We'll go over this one more time because it's not important at all. Champaign School District (Centennial, then Central), then Rantoul School District, then PBL, then Iroquois West. Four districts away is enough for me to say "local recruit". Iroquois West HS is 50 miles from Memorial Stadium, which made me wonder... who is the last HS recruit (not walkon - someone signing a Letter Of Intent) within 50 miles of campus?

It didn't take me long to remember that there's two guys from Danville on scholarship (Caleb Griffin and Julian Pearl). But besides those two? Griffin Moore is from Bloomington HS, but that's 54 miles away so it doesn't fit my 50-mile radius. I guess we'd have to go back to Dominic Stampley a few years ago (who was from Champaign, then went to junior college, then came to Illinois). Not many Illini recruits within that 50 mile radius the last 10 years. Longsnapper Mike Martin was from Champaign (a walkon who was eventually put on scholarship). Dillan Cazley maybe? How far is Charleston HS? It's... 48 miles. So there's another one.

My point: it's been a while since there was a Brit Miller (Decatur), a Mikel Leshoure (Champaign Centennial), or (trying to think of someone from Urbana HS)... Morris Virgil. Your turn, Tuscola - time for another Fred Wakefield. Red rover red rover send another Sean Bubin on over, Rantoul. Iroquois West has now done their part.

Let's actually start there for Leonard. Iroquois West is a 2A school, so the level of competition is way down there. And the school is on their third coach in four years. Win totals the last three years: 0, 1, and 1. They last made the 2A playoffs in 2006, so yeah, this is not the small school powerhouse program we were discussing yesterday with Hank Beatty. That's not to say small schools can't produce great players - I mentioned Fred Wakefield above, and he went from a small school to a long NFL career - but the level of competition for Clayton Leonard, both in practice and during games, is going to be just about the lowest level of anyone on the entire team.

This is not some wild stab in the dark, though. He was on the radar of other programs. Let's just go through his recruiting timeline (using his Twitter profile). It's going to be a weird profile - remember, he couldn't camp, didn't have a high school season in the fall, so he had to get his own name out there - but let's to through it step by step.

His first recruiting tweet is from last summer where he uses a screencap of something Matt Lemming wrote about him (that's Tom Lemming's nephew, now the recruitnik in the family):

I had a great time at the LPI Showcase. It was really nice to finally get an opportunity to go out and show people how much I’ve improved since my injury. Thanks to @lemminginsider @Jlemming18 @CoachBigPete and @PrepRedzoneIL. pic.twitter.com/n5y5gAFCJT

Here's the timeline after that:

This past weekend, he took his official visit with the others in his class who have verballed. And he tweeted this photo which I've been using to try to get "Bruise Brothers" started on Twitter (Bart Miller is on board): 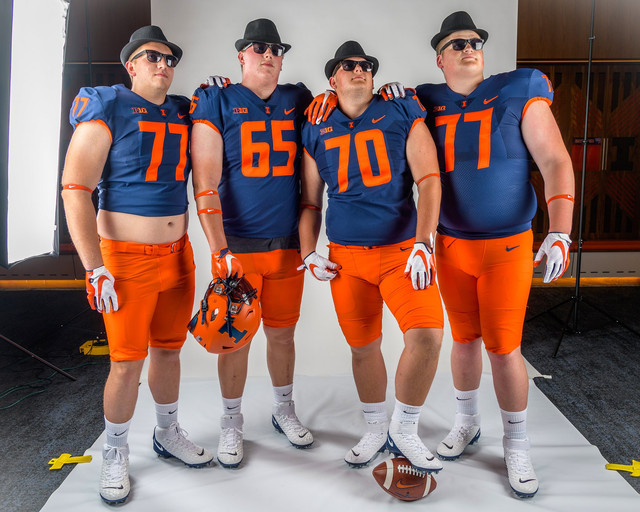 Film is very hard to evaluate. It's a high school team that has won two games in three years playing 2A competition in an abbreviated spring season with only a few preseason practices. So really, all you can do is look for what kind of athlete he is for his size and then try to figure out if he can still do that once he's been beefed up to 305 lbs. This clip should tell us most of what we need to know:

We now know that at 260 lbs he can hop out of his stance and immediately start rolling downhill. And that he likes wrestling a guy to the ground once he gets to his block. The question: can he add 45 lbs and do the same thing? He has the frame to add the weight. He runs really well for a guy who lists himself as 267 lbs on Twitter. Run like that and you can be quite useful as a guard. The question: how well do you maintain all of that once you start adding weight to your frame?

For Tom Cruises, that usually doesn't total up to much. Small school competition, so he'll need to learn so much about playing offensive line once he arrives on campus. He did have interest from Iowa and Purdue, but Illinois was the only P5 offer. Danny McGuire was my main focus with OL recruiting in the 2022 class, and he has offers from everyone from Tennessee to Oregon to Michigan State to Arizona State, but McGuire picked Northwestern. McGuire would have pushed close to four Cruises. Leonard didn't have those offers, and he didn't play that level of competition, and he doesn't have that film, so he'll have to be lower than that.

There is a kid from Arthur-Lovington-Atwood. (It was just A-L when I was there, but they added Atwood sometime in the 16 years since I graduated)

He currently holds an offer, not sure if it’s commitable...but I think they said they could see him playing TE...which we all know we are scarce on. ??

I would say it's commitable