One of the best gifts I can give my wife for her birthday: a weekend away from my laptop and phone. She knows that this "career" of mine requires a fair bit of checking Twitter during dinner and publishing an article from our hotel room on vacation. And she's good with it. But my phone and laptop are still this never-ending presence in our life.

So this weekend, with her hitting a milestone birthday (it was her 50th, but I can't say that out loud), I planned a full weekend away for us. I didn't watch the Indiana game, I didn't refresh Twitter constantly... I didn't write a single word on Friday, Saturday, or Sunday. We went to St. Louis, hung out with friends and family, and I handed the keys to the site to Tyler for the weekend. He wrote the SHWD, then he wrote about the IU game, and then he even added a Rewind article to recap everything. Three cheers for Walkon.

And when I say I skipped the Indiana game, I mean I only checked the score at halftime. Muted all group texts, put my phone on Do Not Disturb, existed in a space where it was just an uneventful Saturday afternoon. I didn't even check the final score until well after the game finished. When I go dark, I go DARK dark.

It's something I should do more often. Because while I was away, we beat Indiana on the road by 17 and then Palcho returned for another season. Let's get me up to speed.

Must Be In The Front Row

After an action-packed Saturday, my wife and I turned in a bit early on Saturday night in the hotel room. So I woke up at 5:15 completely wide awake. She slept until 7:15 so I watched the Indiana replay on my phone. I don't go THAT dark.

While watching it, I really enjoyed one moment. You know how most schools have added those near-baseline seats for donors? We have them after the renovation. A single row of court-side seats across from the benches. And you know how Iowa always has those dudes who walk a few steps forward so they can complain about the officials fully knowing that they're on camera? And how they walk out to celebrate threes and say things to the Illini players? And how you once punched your television because you thought maybe, just maybe, they'll feel this punch through the wonders of technology?

Well, Indiana has those fans. You can't see them as well because of the camera angle, but Indiana has Front Row Fans. And if you watched closely, a few of them were all up in the ears of the Illini players in this one. Mouthy fans, those Hoosiers.

So you probably remember this moment. We trail by two, Trent gives a little separation shove, Xavier Johnson tosses his head back like he just got hit in the face with an RPG, and the ref calls the push-off on Trent. The Front Row Fans were all over Trent. 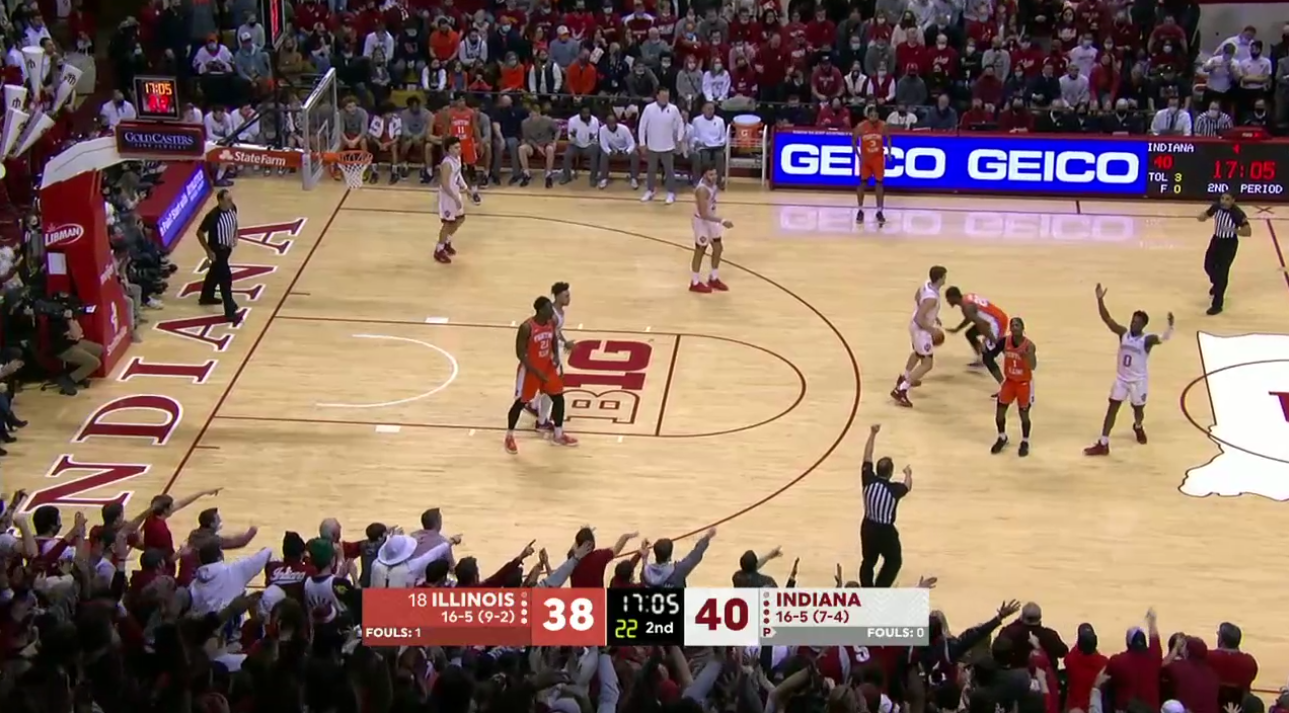 Later on in the game, those fans were a lot less point-y. You might say that they got really quiet. You could also say that Trent maybe remembered all of the yapping and rather enjoyed this moment:

Much respect for the two guys who made eye contact with Trent. They were in his ear all game, and he just dropped a three on their heads, and they know they have to just take whatever it is he said. Also, much... laughing at the guy looking at his phone, pretending like Trent just didn't ruin his weekend. "Look, honey - Uncle Carl just put this Eric Holcomb meme on Facebook and I want you to see it right now because there's nothing else important going on at this moment and this is what I care about today."

I love it so much when opposing fans leave their own arena saying "at least that's the last we'll see of Trent Frazier".

So here's the thing about Palcho returning for a sixth season. I don't think I understand how?

Kendall Smith I understand. He's returning for a sixth season, I'm assuming, because of his 2019 season where he played in only two games. I should go back through the rules here.

Everyone gets five years to play four seasons. The fifth season is a redshirt year and it can be used any of those five years. You can play two years, sit out the third year, and then play two more.

Palcho also played as a true freshman in 2017 and also had a season where he only played in four games (2020 when he tore his ACL at Rutgers, the fourth game). But I figured he wouldn't be able to use that year as a redshirt year since it was the "this season doesn't count for anyone" year. His seasons:

So he's now 1-to-play-0. His clock technically has a year left but he used up all four seasons (plus one bonus year). Yes, he only played in 4 games that bonus year, but he had four seasons where he played in 11, 12, 13, and 12 games. We all figured he was done.

But apparently the NCAA isn't viewing "redshirted during the Covid year" as "well it's not really a redshirt because technically everyone is redshirting since it doesn't count towards eligibility". Apparently, for Palcho and Michael Marchese (who also only played in four games in 2020), that year can count as a redshirt year, they still keep their "everyone who played through Covid is technically 6-to-play-5" status, and so 2020 gets a redshirt applied and 2022 is still 1-to-play-1.

Which is just massive for us. Going from "1 starter returns" to "2 starters return" on the offensive line is a really big deal. Let's go through those numbers.

The OL play (and Chase Brown's numbers) seemed to improve once the staff switched Palcho and Pearl. Palcho moved to guard, Pearl to tackle. At the same time, the staff put Jack Badovinac permanently in the starting lineup. After moving players around for the first seven games (Blake Jeresaty, Jack Badovinac, and Alex Pihlstrom all got starts), the staff settled on the same line for the final five games: Lowe-Badovinac-Kramer-Palcho-Pearl. Four of those five then graduated.

This announcement was one big "wait, no they didn't." Palcho returns. So instead of "Julian Pearl plus four new guys", it's "Pearl and Palcho plus three new guys". That's a big boost.

But I just got off the phone with Carmen as we planned our festivities in West Lafayette after we beat Purdue tomorrow, and I told him of my Palcho-back-to-tackle plans, and as the President and CEO of the Palcho Is Your Best Guard Why Don't We Play Him At Guard fan club, he was ready to fight me. So I'll hear his case tomorrow and see if he can change my mind.

For now, I'll go with this as my projected line. Subject to change:

I tweeted out the most recent team sheet this morning. Figured I should maybe also write about it here.

Here's the latest as of this morning:

The best news is this: in the all-important Q1 + Q2, we are now 9-5. That's huge. When I was freaking out about this three weeks ago, many of you told me "just hang tight, wins are coming" and I feared that wins were not coming. But now that the wins have arrived, well, let's go through it all.

At the time, I noted this:

There are fewer Q1 opportunities this year, and with the missed opportunities against Marquette, Arizona, and Purdue, a similar run to last year (16-4 in the Big Ten and then a BTT title in Indy) is probably capped at a 3-seed. That's totally fine - I'd love a 3-seed because we never get to play on that side of the bracket - but I just wanted to point it out. As of this very moment, here's the top half of the Big Ten in Quad 1 + Quad 2:

If I had to guess right now, based on that, I'd have Purdue and Wisconsin as 2-seeds, Illinois as a 4-seed, and Michigan State a 5-seed. That will all change with the next month of basketball, but that's where I'd have the seeds if today was Selection Sunday. Right now I'd have Kansas (8-2 + 4-1 = 12-3) ahead of Purdue for the final one-seed.

Give me the bottom half. Get that three or two.

I think one of the JuCo OL will start for sure. Adams likely at LT

West Lafayette resident wondering what those plans are. ;) I’ve waited too long to buy tickets and can’t quite spend the cash, and I’m going to hate every minute on my couch instead of being at Mackey.

I agree with Carmen. Palcho, at times, struggled in pass coverage as a tackle. I am not sure why you would move a very good guard to become an average tackle. That would be my last resort move. You got all spring to find a tackle among several candidates and if you can't, then go to the portal.

Definitely makes sense to have Palcho and Pearl anchor the right side of the line.