I swear I don't try to do this. There's no "ooh, I bet I can stretch this out into one of those Family Circus wandering posts I seem to write all the time". I just go somewhere, follow the rules, and end up wandering around the entire arena. To pass the time until our game (Delaware/Villanova is going on in front of me right now, but I'm too nervous about our game to pay much attention), I'll just give you my entire path inside the arena.

First off, the reason I say "Family Circus" is the image above. Back when you entertained yourself with the comics page from the newspaper instead of playing Wordle on your phone, every now and then there'd be a "dotted line" Family Circus comic strip. Instead of the usual Bil Keane witticism, he'd simply draw a path for the kid to get from Point A to Point B. And when I wander around an arena like this trying to figure out where to go, that's how I feel.

There's no point to this post other than my journey, so if you're looking for some pregame Illini basketball reading, skip this. Some people pace when they're nervous - I write a blow-by-blow of my path from the door to my seat.

And this isn't really a complaint. I'm not asking to speak to the manager. The Iowa football thing in November - that was an email telling me to go to the wrong gate on the other side of the stadium. This is just "it's really hard to put on four games with eight teams in one day". There's eight times the media arriving and you have to work out a system to get everyone in and out (and fed). For me, though, I went 0-5 from the field on assumptions. Really rough shooting day.

I get to the gate and come in just like I did yesterday (through the media entrance). Bag check, metal detectors, and then I ask where we get the meal vouchers. Bobby hungry. I'm told that the vouchers are in the basement media workroom. That's easy. I know where that is.

So I go down the elevator (to the event level) and then walk around to the media workroom. There's the vouchers, I provide my signature on the Robert Rosenthal line because that's me, and I get my voucher. The instructions: the voucher can be redeemed on the third level in one of the club areas at the Concession Classics stand.

Now I make my big mistake. I know that for the first session the Ohio State, Loyola, Delaware, and Villanova media are downstairs while the Illinois, Chattanooga, Houston, and UAB media are up at the very top. So I need to go to the top. I'm sure there's an email (or sign) somewhere that says "when going to the pressbox, only one of the five elevators goes to the very top, so you need to take elevators 1 or 2, not 3 through 10", but I can't find that email nor did I see a sign.

Maybe this is the best place to put my Family Circus map. Here's my nine stopping points from when I entered the arena to when I got to my seat. We're at #5 right now. 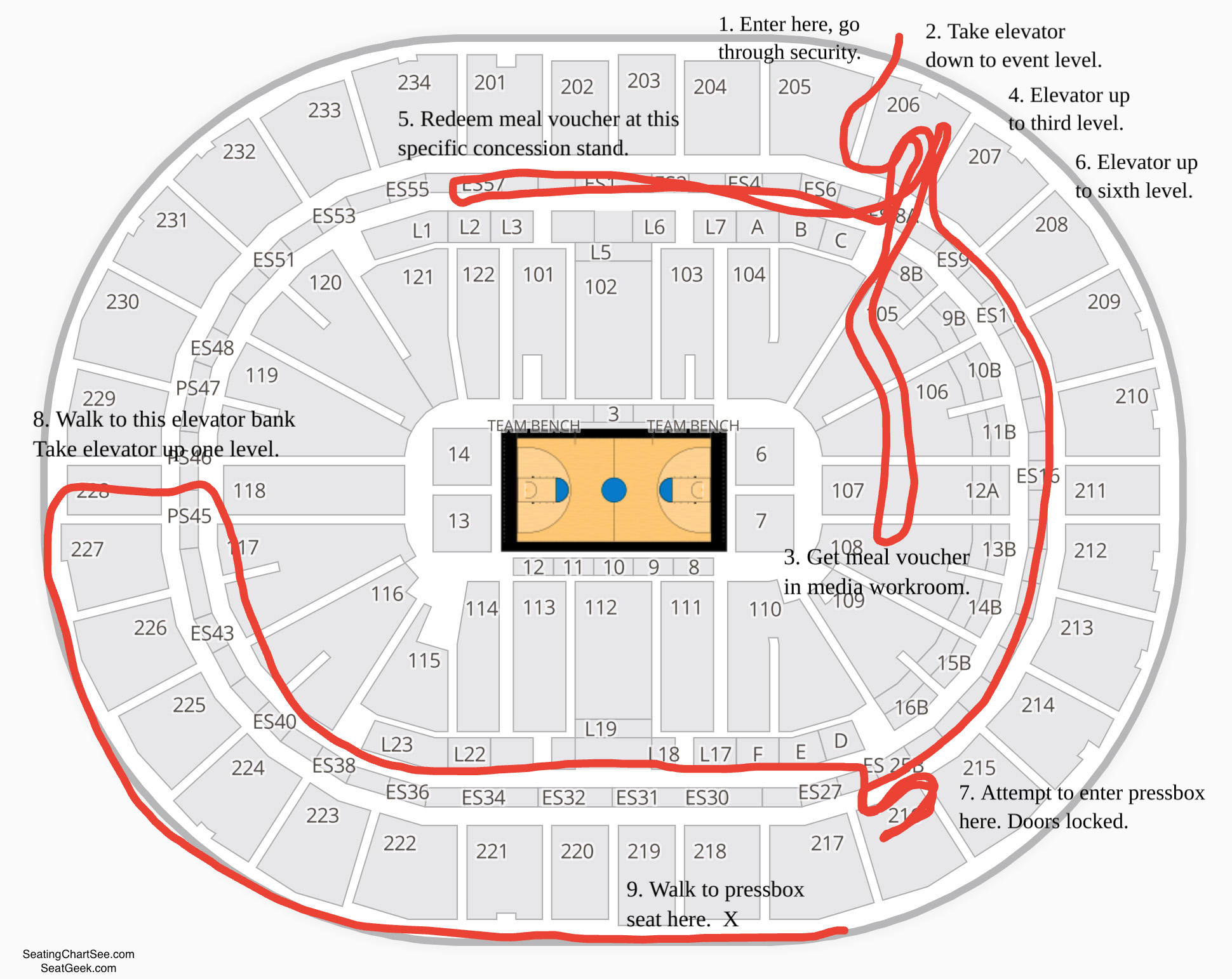 Go around from #5 there and look for 8. Had I walked left out of the club area/concession stand (no reason to know to do this, but at least I'll know on Sunday), I would have come to Elevators 1 and 2, gone up to 7, and I'm there. But I simply went back to the elevators I took to get to the basement and to get back up to 3. Seems logical to take those elevators up to the pressbox, right? Wrong.

I went back to the elevators. The elevator attendant (you have to show your credential to get off at certain floors) told me that she couldn't take me to 7. But she'd take me to 6, I could walk around to the left, and then get on the next elevator up to 7 (or take the stairs). Got it. Directions I can follow.

So I walk left and go around until I find the elevators. Hit the up button. As I'm standing there I see a sign off to the side that says "stairs to media deck." I'm about to take the stairs (yes, really) when the elevator dings. Don't mind if I do.

I start to get on and the elevator attendant plus a guy in a suit with a nametag (everyone's boss, it seems) ask me where I'm headed. I say pressbox. They say "this elevator doesn't go to 7 but you can take the stairs". Suit Guy gets off with me and says "I'll take you up there."

We take the stairs up to 7. We get to the door of the pressbox. It's locked. His keys don't work in that door. We knock. No one answers.

Suit Guy tells me "c'mon, I'll take you to the correct elevator" and we head off down the upper concourse. The little squiggly line above is us going up the stairs and then back down the stairs - then we go left and walk that entire upper concourse (I'm drawing it, like, under the seats there). The issue: this is right when Loyola-Ohio State reaches halftime.

So when we walk into the corridor on one end, it's mostly empty. But the time we get down to the other end, fans have poured out of every section and I'm starting to lose Suit Guy. I had one window - when the security guys review film later, they'll pause right here and say "see this was his mistake" - where the Suit Guy shot a gap, I started to shoot the same gap, it closed quickly, and I bailed with a couple opes for good measure. Now I'm stuck behind 7 teenage bros attempting to walk in a 4-3 formation through the crowd. I'm screwed. I considered the Fezzik "everybody MOVE" yell, but I stayed silent. Just tried to keep my eyes on Suit Guy.

He reaches the end of the corridor and looks back. I hold my personal pizza box in the air as my "I'm coming" signal. I apologized for not keeping up when I got to him. He apologized for walking too fast. Very Midwest.

He puts me on the right elevator. Now it's simple. I go up one level, get off, find the guy, he checks my credential and walks me to my seat (hey, not bad, personal service). That lands me here... 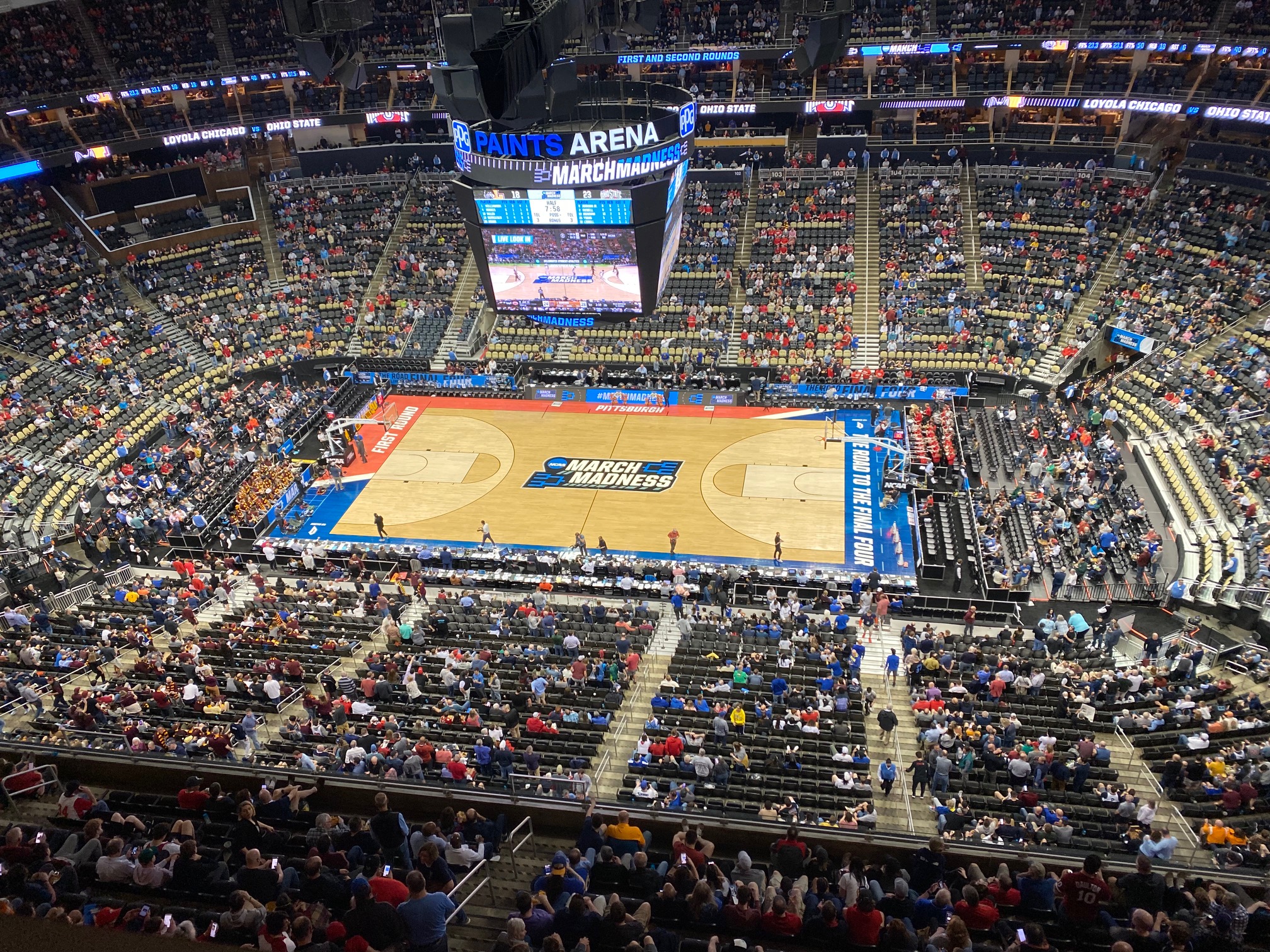 ...where I've watched Ohio State/Loyola (Buzz, your girlfriend, WOOF) and now Delaware/Villanova. As I said above, barely watching. Nervous. Excited, but nervous.

One more story. A little bit ago, the attendant up here came by telling everyone there was food down at the other end. I mean, I just ate this pizza a little bit ago but free food... I'll just go see what they have.

I go up the stairs and down to the other end of the pressbox. I go through the curtain into the room with the food. The attendant says "media - you can't come in here. This is food for employees only." I told him The Guy just came and told all of us "food down at the end". He said "well, he's wrong."

I'm OK with that. Don't need to eat. Probably couldn't eat. Want to win. Need to win. Would give anything for two wins in the next 48 hours.

Was almost nervous there would be a camera in your line of sight.

Circus is apt. This game is laughable and unwatchable.

I thought this picture was for the post game article showing your pacing around the arena while we forget how to play basketball.

One down, one to go. Second weekend. Survive and advance.