Team USA competitions with Illini players participating: this sort of thing is my bag, baby. I can't get enough. It's one of those "why don't more people care about this like I care about this?" things. I couldn't care less about some summer AAU tournament with three prospective Illini recruits playing, but an actual signee playing in an international competition? No chance I'd miss a single minute if it's being broadcast somewhere.

I guess that fits with the way I follow (and cover) the team. You all know that I despise the "EJ Liddell is probably going to pick Illinois!" (EJ Liddell didn't pick Illinois) side of recruiting. I hate it so much that I don't even cover recruiting until a player picks Illinois (and even then, sometimes not until months later). It's subscription suicide to not cover recruiting, but that just goes to show how much I hate "tell the fans what they want to hear" recruitapalooza.

Once a recruit has verballed or signed? I'll go to a shootout to watch Ayo, I'll drive to high school football games to watch a guy like Tony Adams, and this week I watched all 240 minutes of Team USA U18 basketball. Upon finishing the championship game (Team USA won 102-60 over Brazil), I immediately started writing this article so that I can amend Ty Rodgers' Tom Cruise rating. My brain is all "stop writing the intro so we can start talking about Ty Rodgers" right now so I'll end the intro and start talking about Ty Rodgers. Right now.

Here's the thing: he doesn't try to score. At all. He can score, and he did score (13-18 shooting in the six games), but he goes out of his way to not score. This is not Te'Jon Lucas struggling to find an outside shot or even Da'Monte Williams being reluctant to shoot the ball. This is a basketball player who seems to genuinely enjoy the other things more than scoring. Give him the choice between 27 points or 3 points, 9 rebounds, and 8 assists and I can almost guarantee he'd choose 3-9-8.

The competition in this tournament was very poor, and opposing coaches would switch to a zone in a desperate attempt to stop Team USA, and then Ty Rodgers would flash to the center of the lane, get the ball at the free throw line, take one dribble towards the hoop to get the zone to collapse on him, and then dish it off to one of the bigs for a dunk. Rodgers would then come out, and the guy who replaced him would flash to the center, get the ball, take that dribble, and shoot. And then Ty would come back in and pass pass pass.

Again, this is not because he is a poor shooter or something. He was 3 for 3 in the championship game and 13 for 18 overall. Given the defenses that Team USA faced (and given that Rodgers played starter minutes), he could have averaged 13 ppg in this tournament. The team was up by 30+ for 80% of all games played, so this wasn't "the game is close, so we need to get a good shot every time down" either. The games were not close and the Team USA kids were taking all kinds of really bad shots.

But Ty Rodgers... refused to take these shots? It was the weirdest thing. Team USA is up by 45, Rodgers comes back in, you're thinking "OK now he'll try to have some fun on the offensive end", and NOPE, there's a touch-pass to Ware for the dunk. I just think he believes that basketball is all about teams finding the highest percentage shots (it kind of is). And he doesn't shoot because he thinks there's still a higher percentage shot out there (there almost always is). He's a forward who thinks like a point guard.

And yes, he's a forward. I'd probably describe him as a 6'-6" forward with the wingspan of a 6'-9" guy which allows him to guard the other team's big. He also has a very strong frame which pushes him even more towards power forward than wing. But he loves to pass and, honestly, I think he prefers that the offense runs through him. He might be the purest point-forward that the Big Ten has seen in quite some time.

I haven't even talked about defense here. When Rodgers signed in November, Brad Underwood said that he thought he was "the best two-way player in this class" which was a huge statement for someone ranked between 45 and 110 in said class. But after Rodgers won a starting role on the U18 team (27 players from the 2022 and 2023 class were invited to the Team USA training camp, 12 were selected for the team, and 5 were chosen as starters)... I do believe that Underwood is correct. Go ask Tad Boyle (Colorado head coach, also head coach for this U18 team) where he thinks Ty Rodgers should be ranked in the 2022 class and I'd be willing to bet he says he's a top-10 player in the class. I KNOW he'd say that he was the top defender at this tournament.

Take the championship game tonight. From the opening tip, Boyle had Ty Rodgers on Brazil's best player (Reynan Dos Santos, who made the All Tournament Team). Rodgers subbed out with about two minutes left in the first quarter, and after one more Dos Santos miss, I screencapped his first quarter stats:

Brazil-USA in the U18 title game. Brazil's leading scorer, Reynan Santos, is scoring 16.6 ppg in the Tournament. In the first quarter, Tad Boyle puts Ty Rodgers on Santos. His stats: pic.twitter.com/poeRX0c5vu

Ty's defense is probably the thing that stuck out the most when watching these six games. I'm now questioning why I led with "he likes to pass, not shoot" here when his defense is so great. Perhaps this is where I should link some of the videos I put out on Twitter the last few days.

He’s your zone buster in the lane and then he’s your defensive pest. Just could not be more excited watching Ty Rodgers (#9) in this tournament. pic.twitter.com/eOVGBUP7tX

Act I: A Ty Rodgers block is called goaltending with a super late whistle (it probably was).
Act II: Ware putback dunk that probably should’ve been offensive goaltending.
Act III: Ty Rodgers with a “let’s see you try to call this one goaltending” block. pic.twitter.com/4c9rB3lMz3

Here's the overall stats for Team USA throughout the Tournament. GG Jackson was injured in the second game and didn't play in the final four games. So it was mostly an eight man rotation: Armstrong, McCain, Dailey, Rodgers, and Ware would start and then Whitmore, Trimble, and Black were the first three off the bench with Carlyle, Castle, and Garrison getting mostly third and fourth-quarter minutes. 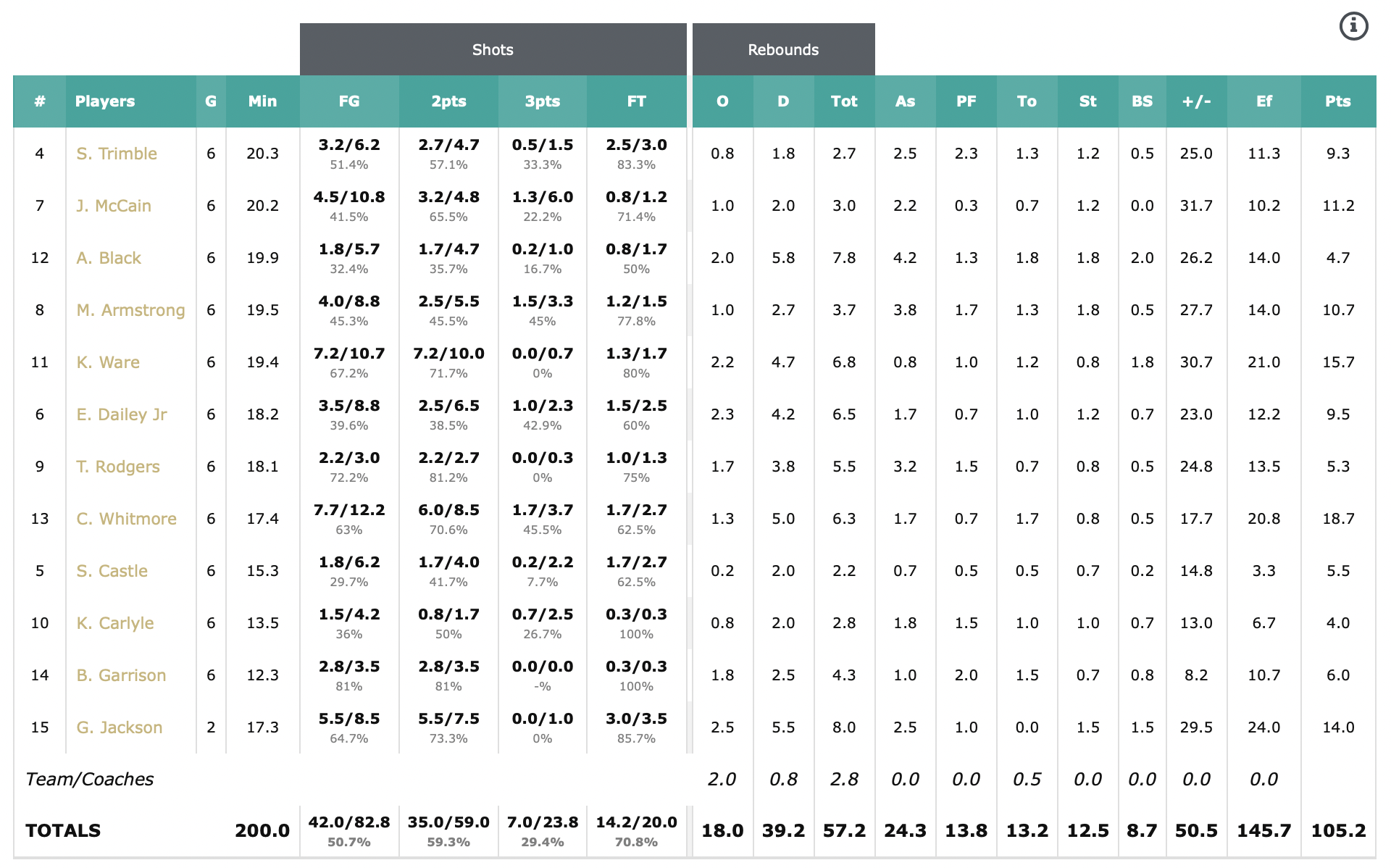 So, 5th on the team in rebounding, 3rd on the team in assists... and 10th in scoring even though he had the second-highest shooting percentage on the team. That's maybe the perfect way to describe his game.

Actually, no, this is the perfect way to describe his game: Cam Whitmore and Kel'El Ware had the NBA scouts drooling this weekend. Mark Armstrong and Ty Rodgers had the NCAA coaches drooling. That's not to say that Armstrong and Rodgers don't have NBA potential (or that Whitmore and Ware won't be great college players for one year). I'm just pointing out that Armstrong and Rodgers made this team go. Anyone who watched all 240 minutes likely came to this same conclusion.

Which brings me to a new conclusion. When I hand out Tom Cruises for football, I always allow myself one evaluation upgrade. Seth Coleman didn't play football his junior year of high school and then committed to Illinois after an impressive camp. With only sophomore film to go on (and no other offers), I gave him two Cruises. Then, once there was senior film (and offers coming in even though he was committed to Illinois), I bumped him to three Cruises on Signing Day.

I've never done that for basketball, though. Until tonight. I loved Ty Rodgers when watching his film and gave him four Tom Cruises. But now I don't feel like four is enough. I'm not ready to push to five Cruises like I did with Ayo, but I am ready to get close to that. After his performance this week, I really do think he's a top-25 player in this class. And that means...