I pride myself on being an expert at eligibility math. If there was some kind of math competition where one category was "college football eligibility", the math coach would add me to the team just to dominate that category. They'd put me in the lineup, and the question-asker would be all "this player redshirted as a freshman at a Division II school in 2017 and then transferred to a Division I program in 2020 - how many years of eligibility do they have left?" and I'd buzz in before she even finished saying the word "eligibility" and say "this player would be 1-to-play-1 in 2022 because they entered the Covid year as a 2 to play 2 but then retained that eligibility so 2021 was 2-to-play-2 again and 2022 is 1-to-play-1."

((Massive applause from the crowd))

((High-fives from the mathletes on my team))

(("He did it. The son of a gun actually did it" from my junior high math teacher in the back who never thought I'd amount to anything yet showed up to the math competition to watch his niece and got to see my on-the-fly eligibility arithmetic))

But even as that expert, Jonah Morris is a difficult eligibility case. His final high school season was in 2015 and now he'll play college football for the Illini in 2022. Did he enter as an 8-to-play-7 or something? Let's try to track it. 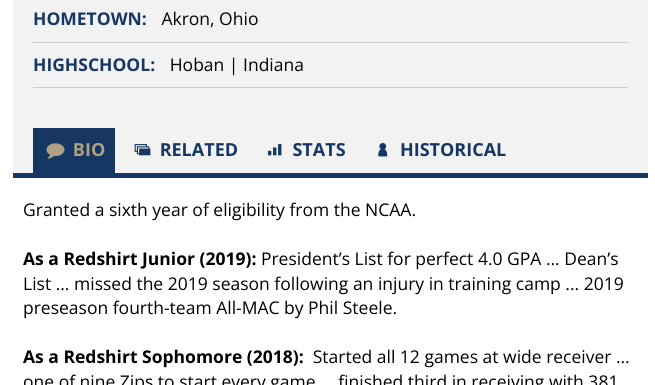 All I can think is that after the injury in 2019, the Akron compliance department made the case that he should get a medical redshirt for missing 2019 at Akron and 2016 at Indiana. His 2016 must not have been a regular "freshman takes a redshirt year". He must have been injured. If you miss two full seasons due to injury you can get a sixth year, so that must be the argument made at the time. "Hey, he missed both 2016 and 2019 with injuries - he should have two years of eligibility left, not one".

(Worth noting, this is where people always got hung up with medical redshirts. I feel like I've answered that question 200 times but 201 won't hurt. "Anderson missed his junior year with an injury so he can just apply for a medical redshirt, right?" No. Yes, it's his second season taking a redshirt, but the first time he took a redshirt, as a true freshman, he was just a scrawny kid not ready to play yet. To get a medical redshirt waiver you have to miss two full seasons with injuries.)

So that's really the only answer that makes sense here. His 2016 Indiana season must have been retrofitted as an injury year. Let me see if I can find proof of that.

I can. This article from a Michigan State site lists the Indiana injury list for the MSU-IU game in 2016 (Morris' true freshman season). Here's what it says for Indiana:

He didn't play in any games, so the injury must have been a season-long thing, and because of that I finally have my answer. An answer to something he probably explained in interviews when he committed to Illinois but since I don't read those (and since I don't interview recruits) I'm just now landing on his path to a seventh season:

Give me my mathlete medal.

OK, so your big question is this: can he contribute in this one final season? We need receiver help - is he going to be receiver help? It's really hard to say.

You know I'm a comp guy, right? Well, someone find me a comp for "originally committed to Michigan State in high school but then flipped to Indiana. Played there two seasons before transferring to Akron. Had a really solid 2018 season at Akron and the future looked bright but then an injury cost him the 2019 season. Just before the Covid season he entered the portal and after the Covid season he ended up at FCS Northern Colorado where he caught 20 passes from former Michigan quarterback Dylan McCaffrey before entering the portal yet again and transferring back up to Division I (and back to the Big Ten) to pay one final season at Illinois."

Actually, as I was typing that out, Daniel Imatorbhebhe came to mind. That's probably the comp here. He started at Florida, transferred to USC when his brother Josh committed there, played well early but then missed two full seasons with injuries and appeared to be done with football but then decided to play football again and transferred to Illinois to play a sixth season in 2020 with the Illini. And then, since 2020 didn't count, he transferred again (making him another 7-to-play-4 player) and had 12 catches for 314 yards and 2 TD's last year at Kansas State.

That's almost an exact comp, actually. 5 becomes 6 with a medical redshirt and 6 becomes 7 with Covid. Maybe my projection for Morris should be 12 catches for 314 yards and 2 TD's?

I did find these highlights from Akron. And I'm not going to lie - these are solid. This was 2018 (pre-ACL injury), and it's now 2022, so that must be taken into account. But this is a solid highlight tape. He absolutely destroys the Northwestern cornerback at 0:25.

But again, it's very difficult to project that all the way forward to 2022. Let me see if I can find some Northern Colorado highlights.

OK, so this is interesting. He posted some Northern Colorado highlights on Twitter after he entered the transfer portal. And the tweet says "Games before my concussion!". His stat page shows stats from five games, so perhaps the reason he was limited to 20 catches on the year was because a concussion cost him the rest of the season after those first five games.

The highlights are fine, by the way. You can see why he was originally a Big Ten recruit. There's skill here. He's hopped around to four different schools but there's still an athletic receiver on my computer screen. The main questions are durability (missed 2016, 2019, and half of 2021 with injuries) and fit (he'll have four months to find a role on this team and then that's it - career over).

You know, I think I'm ready to make a call on Tom Cruises. This is a middle-of-the-road 2.5 to me. I can see a scenario where some Michigan State fan says "remember that 4-star receiver who verballed to us in May of 2015? He dominating at Illinois right now." I can also see a scenario where he doesn't play a single snap this fall because Shawn Miller and Eian Pugh were ready to play immediately as true freshmen and they combine with the returnees to make up our WR two-deep. When a player is equal parts "could be a huge surprise" and "could be a huge disappointment", I know what to do.

I agree with your, "maybe so, maybe no", conclusion. I guess it depends upon how the coaching staff decides to use him.

Robert, are you going to do a summary of this recruiting class like you have done in the past?

I give you 5 Tom Cruises for the extremely detailed, some might say torturous, explanation. I suspect, barring injuries, this guy doesn't play. However, I admit I am no football evaluator.