The first time I drove to Lincoln in the winter it was -2 degrees and snowing. We played like it was -2 degrees inside the arena (easily the worst game we played the entire 2020-21 Big Ten season) and we almost lost. Ayo had to save us in overtime. My hotel room faced the strong north wind and the heater just couldn't keep up. When I woke up in the morning I swear it was 46 degrees in the room.

The second time I drove to Lincoln in the winter it was a little warmer but we played like there was snow on the court. Kofi was struggling and we found ourselves tied at 65 at the under-4:00 timeout. Nobody will believe me when I type these words, but we sat Kofi on the bench and played Omar Payne the final four minutes. Payne took over (I want to say he scored eight points in those final four minutes?) and the Illini won. Wasn't pretty, but a win.

The third time I drove to Lincoln in the winter it was even warmer. Above freezing, actually. There's no snow on the ground. And despite starting the game shooting 1-11 from three, we eventually warmed up and demolished the Huskers 76-50. Besides that quick 6-0 start to the second half by Nebraska and the 10-0 run by That One Guy Who Looks Weird, this was was all Illini. We finished the game on a 17-1 run and won by 26.

So yeah, third time's a charm. And it's weird. We were ranked the last two years coming in here, Nebraska was the worst team in the Big Ten, and the 2021 game was tied at the end of regulation while the 2022 game was tied with 3:57 remaining. This year, Nebraska is improved (they took Purdue to overtime here one month ago tonight and have already beaten Creighton and Iowa) and... we win in a laugher that had the Nebraska fans heading for the exits with 12:00 to go. The Ayo/Kofi team that finished the season #2 in the polls: overtime game at Nebraska. This team that has looked listless and uninspired in losses to Penn State, Missouri, and Northwestern? Win by 26 over the best Nebraska team of the last three years.

Look at it this way: Nebraska is currently #82 in the NET rankings. A Quad 1 win is any win over a top-30 team at home, a top-50 team at a neutral site, or a top-75 team on the road. As of right now this is a Quad 2 win, but if Nebraska can climb seven spots by the end of the year, this will be a Quad 1 win. The last two years, Nebraska was #129 and #145 in NET, so those Illini teams came in here to avoid a bad loss. This win, if Nebraska does climb seven spots over the rest of the season, will be on the Committee's team sheet in the same column as the UCLA and Texas wins.

So it wasn't just encouraging in the "things are starting to look like they're supposed to look" sense. It's encouraging in the "Nebraska is much improved and we handled them with ease" sense. Walking into the building tonight I felt all the same things that I felt the last two years. Road wins are hard to come by, even at Nebraska.

Walking out the last two years, a sigh of relief. Walking out tonight? Huge smile on my face.

+ I think we can all agree that this was Ty Rodgers' best game. It probably won't show up on the stat sheet, but let me go look up his stats anyway:

Yeah, it doesn't really show up on the stat sheet. But his defense on Sam Griesel was outstanding at the end of the first half. And those seven rebounds were huge. And this putback at the end of the game was... let's just hope for 35 more putbacks like this the next four years:

I sure hope that AJ Redd, the manager-turned-walkon who took that shot, is telling everyone "it was a pass off the backboard to Ty" on the team plane right now.

Also, watch it again and just watch RJ on the bench. Love that.

+ For some reason I need you to know that The Guy Who Looks Weird on Nebraska was a top-100 recruit. I'm talking about this guy (Wilhelm Breidenbach): 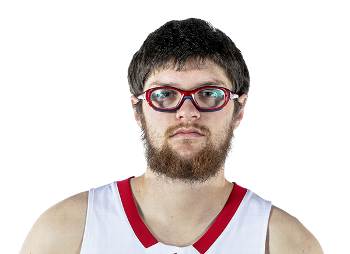 + Got a text from my friend Brent after the game letting me know that five guys were in double figures (Shannon, Hawkins, Epps, Mayer, and Melendez). If you missed what I wrote over the weekend, after the Wisconsin game I set a certain goal for the rest of the season. This can't just be "save us, Terrence", so we need four of the main six scorers (those five guys plus Dain Dainja) to get into double figures every game.

Five in the first game after I set that bar is a great start.

+ Not sure if you could hear it on TV but this was the loudest the Illinois bench has been all season. Bench noise became a thing in 2021 because of empty arenas - the only "fans" who could make noise were the bench players and the student managers. The Illini bench won the Big Ten title that year as the loudest bench in the conference. And they maintained a similar level of noise last year as the fans returned.

This year, during road games, they've been fairly quiet. I noticed it the most during the Maryland loss. They still make noise for a big three or a dunk, but the constant noise of the last two years was gone.

Tonight it returned. "BOOOOOM" after a three pointer. The "D-UP (d-up) D-UP (d-up)" cheer was back. I don't know what the noise was like at Northwestern last week (I wasn't there), but there had to be a team conversation about this recently. Tons of bench energy tonight.

+ I'm a big fan of opposing fans hating an Illini player (not Brad Davison hate, but more like "man, Zach Edey is so hard to stop" hate). And the fans in front of me were hating Terrence Shannon tonight. They really, really want Fred Hoiberg to recruit an athlete like Terrence Shannon.

One of my favorite things during a road game is an opposing fanbase so focused on one guy that when he gets the ball you can hear "no no no" and "not him" in the stands. Audible groans when he starts driving as everyone leans over to their buddy and says "he's gonna get to the rim AGAIN". They were not having Terrence Shannon tonight. And I loved it.

Loved the whole game, really. Yes, it's only Nebraska, and they're not a tournament team this year, but still, we weren't shooting it well from deep (27% from three) and we still found a way to dominate through defense and getting to the line. Dain Dainja completely shut down their leading scorer (Derrick Walker, averaging 15 and 8, was held to 5 points and 4 rebounds), our length at every other position really bothered Nebraska, and we won going away. Gonna sleep well tonight.

Wilhelm Breidenbach, if Robert had a son who played basketball for Illini.

This may have been the most enjoyable game of the year from the "basketball IQ" perspective. We didn't win because of some chaos and better athletes (although that helps.) We won because we played smarter and harder. I guess this was the best coached this team has seemed all year.

Definitely in "bring on Michigan State!" mode rather than "I just hope we survive the next game."

The vibes are indeed immaculate.

We smacked UNL down to 92 in NET so they have a bit more work to get this one to Q1.

Looks like Luke Goode is still in a boot, based on the video clip above.

I believe that is Connor Serven. Goode is to the right of him, with a towel around his neck.

No problem! Have a Good(e) day.

Breidenbach had a case of Stag warming up in his pickup for after the game, while he fed the hogs.